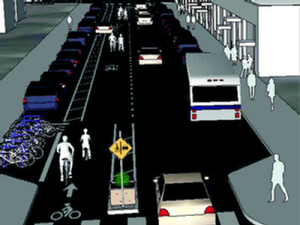 Just before the ball dropped to celebrate the new year, Portland Bureau of Transportation announced that the “N Williams Safety Project reached substantial completion”.  One of the major tasks completed in December was installing the permanent light at Cook.  There is still some minor work to do on Williams and the Rodney Bikeway portion has yet to begun.  It is nice for travelers along the corridor, whether in a car, on a bike or on foot, to see construction wind down and to take advantage of the improvements.

Read the full “N Williams Traffic Safety Project: Construction nears completion with new traffic signal on Cook” press release to find out more details about the new stoplight, the overall design of the street, and to see before and after pictures.