The Eliot Neighborhood Association has written a letter to City and PBOT leaders asking for them to maintain a diverter on NE 7th blocking vehicle travel indefinitely. You can sign on to the letter here. 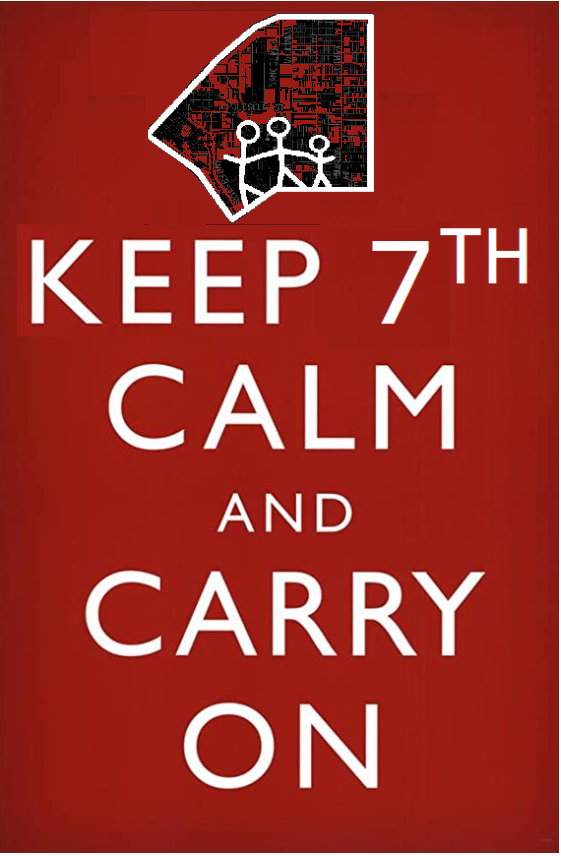 Residents around the intersection wrote their own letter which you can see here.

See the letter below:

Here is the text of the letter if that is easier to read:

We are writing to you on behalf of the Eliot Neighborhood Association (ENA), which has received numerous complaints from neighbors about the dangerous conditions of NE 7th Avenue, between NE Broadway and NE Fremont. The ENA has written to you in 2018, 2015 and earlier particularly concerned about the continued deterioration of the road from a traffic standpoint. NE 7th has way too many cars for a local street: 6,000 per day by the PBOT’s estimation. It is difficult to walk, bicycle and even at times drive on the street due to the pre-construction level of car traffic. Additionally it is difficult to cross 7th at most intersections when not in a car. NE 7th has been a high-volume cut-through route for years and we were previously excited for the Lloyd to Woodlawn project to put this traffic back where it belongs: on NE Martin Luther King Jr, Blvd (MLK).

We would like to reiterate the need for traffic DIVERSION on NE 7th due to the extremely high volume of traffic that it receives despite being classified as a local street. Now that the Blumenauer Bridge has been built, we are excited that the city is prioritizing bicycle improvements on NE 7th. Our concern is that the current design does not reflect the city’s policies to make NE 7th a truly local street with minimal cut-through traffic. The City is proposing a design that will work with the existing traffic volumes instead of trying to change the traffic volumes to meet the City’s published policy goals as we have repeatedly asked. While we like the additional speed bumps and horizontal deflection that were proposed on Thursday, September 15th after the public meeting on the street on Wednesday, September 14th, we believe that traffic volumes need to be reduced as part of the project, concurrently with this project or at a minimum before NE 7th is reopened.  At the Wednesday night meeting, PBOT said that it had no current plans to reduce traffic volumes, but agreed to reopen the dialogue. Our request is that PBOT only reopen NE 7th Avenue to vehicle traffic after traffic diverters blocking North-South through traffic are on the ground.

Prior to the construction fencing, NE 7th Avenue was a well-used de facto bike route despite the high volume of cars on the road. In the pre-construction-fencing configuration, many non-local drivers utilize the street as a way to avoid Martin Luther King Boulevard. These also tend to be the most motivated, hurried, and aggressive drivers who have already decided they are unwilling to tolerate being slowed by the traffic on MLK.

Some of these drivers drive very dangerously including:

In addition to acting as a major bikeway, NE 7th Avenue is a crossing point for elementary-school children headed east-bound to Irvington School and middle schoolers headed west-bound to Tubman Middle School. Because of an interruption of sight-lines due to street trees and numerous off-set or 3-legged intersections, car drivers make it especially dangerous to walk and bicycle across NE 7th. NE 7th also serves as a gateway for several local preschools to reach Irving Park on walking visits.

Before installation of the construction fencing, dangerous conditions on NE 7th were obvious to PBOT, residents and other road users. We believe that it is paramount that PBOT take steps to ensure that NE 7th becomes a safe neighborhood street. After over 50 years of incremental changes, NE 7th is a street that well exceeds the traffic volume goals for local streets of 1000 cars per day. The construction fencing has brought NE 7th much closer to meeting the City’s goals for the street and we would like to make sure we do not revert to the old condition. Redirecting non-local vehicle trips to use other routes, primarily MLK, provides safety improvements for vulnerable road users within and beyond the local neighborhood. Neighbors and PBOT know this would not be happening without DIVERSION, so we are asking for a jump-start to this planning so that some diversion of cars from NE 7th will be kept at the end of the construction project.

The construction fencing that has been installed for over a week now is a great demonstration of the benefits of reduced traffic on NE 7th. Residents are able to talk to each other more easily, people can cross the street without fear and the few cars that are left are traveling quite slowly as their trips are more local in nature. There is more bicycle traffic on NE 7th than ever before, and it helps people get to the new Blumenauer bridge 13 blocks away. The current conditions are making it hard to access some houses and businesses, but drivers have already adapted to the change in roadway access and many cars are avoiding NE 7th, exactly the goal of our request.

We have been and continue to be very supportive of adding many proposed diverters along 7th along the Eliot and Irvington Neighborhood border. Since the last plan for NE 7th was deemed too controversial, we are proposing to keep the street closed to vehicles until at least one diverter is installed.  Split diverters for North- and South-bound vehicle traffic near the project area at NE 7th and Tillamook would also be acceptable. Since we understand that there are some public outreach rules that take time to comply with and that the road is scheduled to be closed for at least 6–8 weeks during construction, we ask that you start this process immediately and/or delay the removal of construction barriers so that when the road is reopened to vehicle traffic, a diverter (pilot or permanent) is in place.

Thank you for your attention to these matters and helping make our neighborhood safer and more comfortable for children and easier for everyone to cross and travel along our streets. I look forward to hearing from you shortly regarding a diverter proposal.

The Irvington Community Association (ICA), which borders 7th Ave., and has long been concerned about the safety of 7th Ave., particularly in regard to vulnerable users such as cyclists and pedestrians, particularly children, endorses and supports the above letter.  We also thank the Eliot Neighborhood Association for bringing this matter to our attention and we too look forward to working with PBOT to come up with a solution which will result in a much safer neighborhood street.